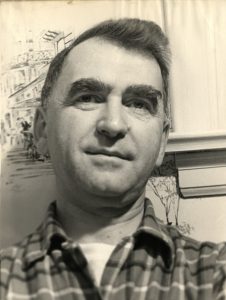 Josh Silburt was born in Plum Coulee, Manitoba, July 24, 1914 and spent most of his childhood in Winnipeg. From an early age, he aspired to be an artist. As a young adult, he studied at the Winnipeg School of Art under the direction of L.L. Fitzgerald. In the 1930’s, Josh rode the rails to Toronto and became a sports and political cartoonist. He continued to take art courses in the evenings at the Ontario College of Art and at Central Technical School while he tried to earn a living by day. In the meantime, Josh became a committed Communist and his political activism created a complex set of challenges that culminated in his being fired from his post as cartoonist for the Sydney Post Record in the early days of the cold war. At the end of the Stalin era, Josh, and many of his cohort on the Jewish left wing, abandoned their political ideals and set their lives in a new direction. Josh, along with a small group of landscape painters that met at the Willowdale Art Group in north Toronto, focused on interpreting the Canadian wilderness, building upon the style and perspective of the earlier Group of Seven. As Canada passed its 100th birthday, and many Canadians re-kindled a love for their natural surroundings, Josh developed his unique style of palette knife application of vivid oil impasto and later brushed acrylics, capturing the beauty and ruggedness of Canada. Over the next 4 decades of prolific painting and evolving technique, Josh enjoyed considerable success with numerous one-man shows across Canada. His work appears in private and public collections throughout the world.